Where does this year's senior class rank? 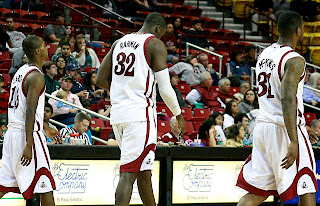 I think Jack Nixon said it best in my story on Saturday, when describing where this year's group of seniors ranks all time at NMSU.


"Lacey, Collins and Criss kind of put Aggie basketball on the map nationally and captured people's hearts here in Las Cruces," said Jack Nixon, longtime radio voice of NMSU basketball. "This group of seniors has quietly done the same thing in four years and they will be remembered with greater significance than people realize right now."


Wendell McKines, Hernst Laroche and Hamidu Rahman led the Aggies to a 79-68 victory over San Jose State on Senior Night Saturday at the Pan Am. Here is a photo gallery from the game and postgame ceremony.


When it's all said and done, I believe this class ranks second behind the great 1970 class of Lacey, Collins and Criss when talking about classes consisting of four year players.


I don't think anyone touches Lacey, Collins and Criss. They did reach the 1970 Final Four after all. From Saturday's story.

"Lacey and Collins are littered throughout the NMSU record books, including the most points scored in a season by two players with 1,305 in 1970.
Collins is third all-time in scoring, fourth in average at 19.5 points per game and his 754 points in 1969-70 stands as the single-season record, all before the 3-point era. Lacey is ninth all-time in scoring and career scoring average (16.27 ppg) and is the unquestioned king of the boards. Lacey holds every Aggies rebounding record, including 27 rebounds in a game, 493 in the 1969-70 season and 1,265 career rebounds. He holds three of the highest rebounding seasons ever at NMSU and his 14.2 career rebounds per game is nearly three rebounds higher than second-place George Knighton. The 5-foot-8 Criss averaged 12.4 points on the Aggies' 1970 team that went 29-3."
But in terms of winning games and leaving their marks in significant statistical categories, this year's group has been extremely successful in their time in Las Cruces.


Laroche has started all 129 games at NMSU. He said he was lucky, coming here at a time when frankly, the point guard spot was up for grabs. Once he gained a foothold as a freshman, he never relinquished it. He's five steals behind William Benjamin's school record of 209. He won't catch Sam Crawford for all-time assists, but he sits in second comfortably at 526.


Hernst Laroche:
On his freshman year
"It was hard but Gib and JY got me into it. I was working out with Gib late at night. It was hard, especially speaking mostly French. That was the story of my freshman year but it went well. "


Laroche and Tyrone Watson were the first of the Canadian movement to NMSU
"I'm proud of it. Bring some diversity here to Las Cruces. That was cool."


With five blocks on Saturday, Rahman now is second all-time by himself with blocked shots with 129. Rahman's size has been his biggest strength and few teams in the WAC have been able to match up with him in his time at NMSU.


"I have known Wendell for five years and Laroche for four years. They are the only two guys I have been playing with since I got here. Laroche has developed into a great point guard and got better each year and so has Wen."


We all know about Wendell McKines joining Lacey as the second player to ever score 1000 points with 1000 rebounds. McKines will leave NMSU as the second leading rebounder and he's been an automatic double-double in the two seasons he played from start to finish. Here is the list for the most double-doubles in the WAC since 1999-2000.

It begs the question....what is the best NMSU starting five??


I would go with Crawford, Collins, Channing, McKines and Lacey.


I could be bias since I saw McKines' entire career. But his development over time has been impressive yet he's consistently hit the boards. On this five, I wouldn't need a power forward who can score, but it's nice to know my four can step out and create or hit a 3 if we need it.


Wendell McKines:
McKines has had an interesting career to say the least. He nearly left NMSU, came back. Missed part of a year for grades, missed all of last year to injury.


On his numbers:
"The numbers show what type of player I am as far as winning and how far we go, that shows what type of person I am and how much I'm willing to sacrifice for the better of the team. That is what I have been thinking about lately."


On his senior teammates:
"That just shows growth and development over time. this is our fourth year playing. We have each had a role on each team we've been on since we have been here. That is growing and developing. The numbers speak to that."


Marvin Menzies:
On Laroche:
"If I would put a word to it, I would say his character would be the thing I will most remember. Just what a pleasure it was to coach him and be around him every day."


On Rahman:
"I look at him as somebody I thought was an unselfish warrior. A guy that went about his business through criticism and accolades. Neither one affected  him too much. He just was a journeyman who took pride in being an Aggie."


On McKines:
"His passion. I think we will really miss Wendell's passion for the love of the game, his heart and his level of intensity. It has been unmatched by anyone I've coached. Those are intangibles you need."


Gordo Castillo graduated last year as the first senior under Menzies, but Gordo committed under Theus. This is really Menzies' first group of seniors.
"These three obviously spending an extra year with two of them, I think it just speaks volumes to what we put in place a while back."

William Benjamin was rare 4 year player during the McCarthy era. I think he played in 4 NCAA tournaments including the sweet 16 team.

Can't say enough about the 3 seniors. Will miss them in the years coming.

Here's to them playing a bunch more games this year...

Great group of seniors. While I think the Aggies should bounce back ok next year, we are going to miss attributes of each of these seniors and the different things each bring to the table.

As for the all-time list, it's a tough call on the point guard. Anybody who saw Billy Keyes play knows that he was one of the best we ever had. Randy Brown was awesome, and had a career well beyond NMSU. Elijah Ingrahm was largely responsible for turning a 6-24 team into a 16-14 team and then an NCAA tournament team the following year. Jason probably got it right, but it would NMSU's rich point guard history makes it a tough call.

What, Aggie basketball on the map nationally ? That was what feels like a zillion years ago and it was short lived.

I see the picture you put on this post and what strikes me the most are the empty seats. I wish that Wendell had played 20 years earlier when a ticket to an Aggie game was valued.

It's a shame to see the empty seats. I don't necessarily blame it on anybody...perhaps just the changing of time????