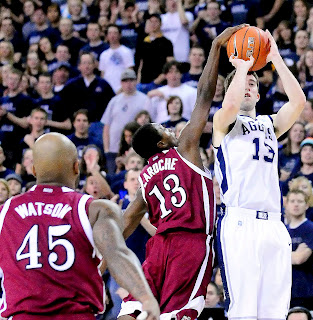 Up to this point, New Mexico State hadn't done anything in conference play to make others in the WAC say, "Did you see what New Mexico State did lastnight?"
The Aggies did it on Saturday, beating Utah State 80-69, beating USU in Logan for the first time since 2006. NMSU has away wins at New Mexico and Utah State in the same season for the first time since 1994-95.
“It shows the resilience we have as a team and our ability to play in tough environments,” said Aggies senior forward Wendell McKines, who led the Aggies with 20 points and nine rebounds. “I just like the environment. The fans are really into it and it tests you as a player. It tests your poise as a player.”
NMSU swept the season series with USU for the first time since 2006, hanging 80 points on them in both games. NMSU pounded away in the paint in a 20-point win in Las Cruces. The Aggies saved that for the second half on Saturday, nailing 5-of-7 3s in the first half to hang around and survive a 15-0 Utah State run and USU making 7-12 from 3 in the first half. Bandja Sy was 3-3 from 3-point range in the first half, Hernst Laroche made one and Remi Barry made one.
What the 3s did was force Utah State to come out of zone. Teams in the WAC, especially Utah State this year, can not guard NMSU man to man.
"Eventually we have to start making some shots," Aggies coach Marvin Menzies said. "They were all good looks and wide open. (Sy's) play was significant. With Bandja, Tyrone and Daniel, we need two of the three to play well and tonight that is what happened."
Defensively, the Aggies stuck with the zone and ultimately were too long, too strong and too athletic on the perimeter for Utah State.
"I didn't think they would shoot it that well for the whole game," Menzies said. "We just did a better job challenging shots that we didn't do in the first half. We mixed it up and tried to keep them a little off balance."

When the Aggies were in man, they were suffocating in the second half. Mullings on Brockeith Pane and Hernst Laroche on Preston Medlin. Medlin finished 6-15 and Pane was 1-7 with 2 points.

“(Pane) is a good facilitator,” Menzies said. “We did a good job of containing his offense. That was a big plus for us. He didn’t get out in transition and get easy buckets like he did the first time.”
And who could forget Laroche's flurry at the end of the game to put Utah State away. NMSU outscored Utah State 14-3 in the last 5:34. Laroche scored seven of his 16 points during that stretch, starting with a lay up after a tremendous block of Medlin's 3 at the elbow.
“That was huge,” McKInes said. “It showed (Laroche’s) focus and alertness. He was ready to get to the next play and he didn’t give up and that’s why he’s a senior and a leader on this team.”

Laroche got tangled with Kyisean Reed fighting off a ball screen at the top of the key. Laroche tripped, rolled over, hopped to  his feet and elevated enough to not only block the 3, but strip it so he could retain possession, race down the floor and lay it in to give NMSU a 73-69 lead. He found Sy on a lob the next time down and also had a steal as NMSU's physicality looked like it took its toll on Utah State in the last 6 minutes.

New Mexico State hadn't had an impressive WAC win this year. Although Utah State is down, anytime you beat Stew Morrill in Logan, it's significant. The Aggies needed it from a standings, confidence and mental standpoint. USU literally looked like they wanted no part of the Aggies in the last three minutes. It showed a lot for the Aggies to regroup after losing a game at Thursday that they should have won, travel all day Friday and win a ESPN2 game against a nemesis. But as McKines said, it's all the same this time of year across the WAC.

"It's all mental at this point," McKines said. "Everyone in conference is tired. The conference doesn't have the best travel arrangements wherever you go. It's the February lull I call it but we were able to get the victory today."
Posted by Jason Groves at 6:33 PM

Nice win in Logan over a not-so-good Utag team. Still, it's a tough place to play at any time.

Too bad that loss at Idaho is sitting there.

Yeah, Hernst is the only guy who wants the ball in his hand at the end of the game. You gotta figure they sweep Idaho too if not for the bs charge call. Gibson was always hungry for the ball in crunch time (recall beating Jaycee Carroll for the WAC title his freshman year). JY, I don't think so much. But Hernst fears no one and deserves all of his career milestones. Not sure 1,000 rebounds for WMc and HR mean as much in the current configuration of the WAC (compared to when all the Mtn West teams were in the WAC). I'm thinking of Kenny Thomas averaging 10 rebounds for his career in a helluva good league.

That said, Aggies were sunk by UTags run if Wen doesn't hit those two consecutive treys, despite the great shooting by Aggie wings in the first half. Worst loss of the season were the So. MS games and especially in Anchorager where they blew a shot at Murray State.

JY not so much? Did you forget the game winner at the buzzer in Hawaii, or the jumper in Babbitts grill in the tournament, or scoring 15 of our last 20 to beat Fresno State w Paul George in overtime? He was as good a closer as I can remember NMSU having in the recent era.

Anyway, to your original point, great game by Hernst, and two of the best coaches we've faced this year ( Morrill and Alford) have both said that he is the heart and soul of our team.

I think the worst loss was UTEP in El Paso, and getting blown out by UNM in Las Cruces.

Still need work! We don't have a true center, Ham has two left feet and chili has two right feet. Neither have any low post moves! Ham was on the ground more than anything. We don't have a legit 3 point shooter. And most important they don't shoot FT's at a high enough percentage. Those three facets will doom this team in the postseason. Wen, Laroche, Mullings are the heart and soul, outside of them everyone else might make a play here and there. But who knows, they Might be able to make a run?

Bandja Sy is the key. When he plays well and hits a couple 3's the Aggies are tough to beat. He played big at the Pit and at the Spectrum this year. Hope he can put together a solid run in March.

Don't let Hamidu and Chili enter a sack race at your company picnic! You gotta dance with who brung ya so the Nevada zone shouldn't deter you from playing inside out. Sy, Laroche and Barry might shoot a better percentage if the centers kick it out of the double-team. I don't see Rahman with any room for a move because he's triple-teamed and getting to the line plenty.

JY was like MJ and just wants the ball all the time. Mullings is a credit to wearing the #23 jersey. Picked the team up at some critical times, too, and all hustle plays. Free Renaldo Dixon.