I spoke with Wendell McKines on Tuesday, ahead of Thursday's NBA Draft. McKines is focusing on the NBA Summer Leagues in July.

McKines worked out with the Warriors twice, Cleveland, Phoenix and the Kings while his agent pushed for McKines' landing with a team in the summer, not only for hopes of landing with a NBA team but garnering interest from teams in Europe.

McKines said two themes came out of each workout and anyone who watched his career at NMSU wouldn't be shocked. His energy level and heart were strengths and his lack of a consistent jumper and size were obstacles.

McKines will make money playing basketball somewhere. I hope he lands in the NBA, but I don't see him getting drafted on Thursday. Every NBA team has a guy like McKines on the roster and his ability as a rebounder is a specialty that makes  him intriguing, especially after watching him do it in the All Star game and averaging 18 and 10 at the Portsmouth Invite against good competition.

In the five years I've covered the Aggies, I believe McKines to be the most well prepared to go to one of the better leagues in Europe initially. Billy Keys, Justin Hawkins, Jonathan Gibson, Jahmar Young and Troy Gillenwater have all enjoyed success in Europe, but I think McKines' college resume and skill set will earn him a nice living.

I talked with Daniel Mullings and Bandja Sy last week as they started their summer workouts and will have feature stories on each player in the coming week. Here is my story on Mullings, who is working on his offense in the summer time.

Leadership wasn't an issue for the Aggies last year as there was a clear hierarchy in the lockerroom it seemed that started with Wendell McKines and trickled down to the experience of fellow seniors Hernst Laroche and Hamidu Rahman.

I would argue that along with the skill level of those players, the leadership and experience were just as important to the team's Tournament season. You can have all of the physical tools in the world, but if personalities don't mesh, as seemed to be the case last year prior to Christian Kabongo's departure, it could lead to a slow start and then who knows  what can happen.

With McKines and Laroche gone, who steps into those shoes next year?

The first player to come to mind is Tyrone Watson. He's proven to be an important player in the past two years and he has the experience and he's one of only two seniors. I love Tyrone's game and I think he is the man for the job, but this is probably the first time I can remember where the team's best leader coming into the season is not the best player. Not neccesarily a requirement for a leader, but it's a new dynamic for the Aggies dating back to Justin Hawkins, Jahmar Young and Jonathan Gibson and most recently with Wendell McKines and Hernst Laroche. Those were all guys who put up numbers every night while Tyrone is more of a steady presence who is not great in any category but is a complete player.

As the other senior, Bandja Sy will also have the respect of his teammates, if not for his experience the past two years, but also the physical gifts he possesses. Sy is a quiet personality by nature, and even Sy knows leadership isn't his strong suit, but it's something you can work on.

The third player who I could see having an impact on a leadership level is sophomore point guard KC Ross-Miller. I've spoken with Ross-Miller just once, and really don't know much about the makeup of the player or his game, but just from a position standpoint, the point guard is normally a player his teammates listen to and respect. He certainly has some big shoes to fill in that regard.

I'm sure there are personalities that will emerge as roles are defined this summer and fall. I was impressed with both incoming freshman Matej Buovac (a captain on his Croatia junior national team) and Kevin Aronis, who joins the Aggies with the maturity of a junior. 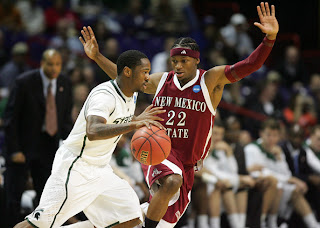 Former Aggie guard Jonathan Gibson told me in the spring that he would play for the Boston Celtics in NBA Summer League play in Las Vegas and Orlando. The Orlando league takes place July 9-13 and the Vegas league runs from July 13-22. I asked Gibson a few questions about his career in Europe since leaving New Mexico State after the 2010 season.


"The team I played for this year is Trabzonspor (Turkey). I led the country in scoring with 20 ppg 3.7 ast 2.5 rebounds. Turkey is the most physical league in the world. Now I'm currently in Italy on Enel Brindisi. We're in the playoffs. We swept the first team 3-0, Here I avgerage 22 ppg 3.3ast 2.8 reb. How the clubs work in Europe, well some teams are professional and some teams aren't, some teams pay on time or are late, but it's a good atmosphere, they have crazy fans, but it's a good experience here. The top countries are Turkey/Spain both of those are arguably first, then Russia/Italy. I signed a one year deal (its finished now), I have a new contract for this team for the playoffs."


How did Boston come about?
"Boston contacted my agent saying they have been watching me all year, and they like how I play the pick and roll , and the speed/aggressiveness.  This will be the first summer league action I will be attending , because last year there was a NBA lockout. This is real big for my career, it shows that the NBA has interest in me and they are giving me an opportunity to make it."


What kind of a player are you now compared to your college career?
"My game has improved a lot since my NMSU days. I could have done the same thing I'm doing now in college, I'm way more aggressive, I'm mastering the pick and roll game, I create a lot more for myself and for other people, I play more physical/tougher,  I have a better understanding of the game. Overall I'm more effective than I was in college. This has been my best year in my career so far. Its just the beginning"
Posted by Jason Groves at 5:22 PM 8 comments: