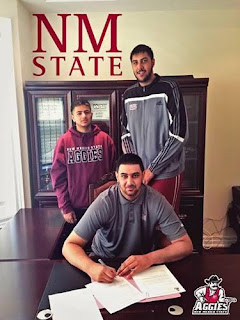 But considering he is close with freshman Matt Taylor, Sim Bhullar and the other Canadians on the team, his comfort level on two unofficial visits this season plus Vegas and San Jose in addition to an official visit last week, made him decide to commit as a 2013 instead of prep for another year.

LAS CRUCES — One of the biggest teams in college basketball just got bigger.
Tanveer Bhullar, the 18-year-old, 7-foot-3 younger brother of 20-year-old, 7-foot-5 New Mexico State sophomore center Sim Bhullar, committed to the Aggies via his Twitter account on Tuesday.
“Excited to finally make my decision and announce that this fall I will be joining my brothers at NMSU!,” read his Tweet Tuesday evening.
Tanveer Bhullar picked NMSU over Oklahoma, Oregon, Wichita State and New Mexico also showed interest.
But it was a familiarity with coaches and players on the roster that led Tanveer Bhullar to pick NMSU. He said he plans to travel to Las Cruces in August.
“It felt like family there because I know half of the people on the team and it just felt like a big family,” Tanveer Bhullar said. “Other schools showed interest but I wanted to end it early. I’m happy that I’m committed and ready to head down to school and get ready to play basketball.”
It’s unclear if Tanveer Bhullar will sit out the 2013-14 season, or join his brother this year in a frontcourt rotation that also includes 6-foot-8 Canadian Renaldo Dixon and 6-foot-10 center Tshilidzi Nephawe.
“That’s what we are going to decide the first couple months in the fall what we are going to do,” Tanveer Bhullar said.
Tanveer Bhullar joined a recruiting class that included Canadian wing Matthew Taylor, point guard Travon Landry (Huntington Prep, West Va.,), Washington D.C., point guard Ian Baker and Texas power forward Kyle Wilson.
NMSU lost seniors Bandja Sy and Tyrone Watson from last year’s NCAA Tournament team while guard Eric Weary transferred to Howard College in Texas and forward B.J. West left NMSU for Jackson State University.
If and when the Bhullar brothers join forces on the basketball court, it would only be the second time. They played together at the Kiski School in 2009 when Tanveer was a freshman.
Yet playing college basketball with his brother was never a forgone conclusion or even a goal.
“It was never a goal to play at the same school,” Tanveer Bhullar said. “It was a last minute thing. I talked to him about it and he said he thought it was a good idea if I felt comfortable.”
Tanveer Bhullar was in Las Vegas during the Aggies’ latest Western Athletic Conference Tournament title run and he was in San Jose, Calif., for NMSU’s NCAA Tournament loss to Saint Louis. He played middle school basketball with Taylor and assistant coach Paul Weir has a good relationship with the Bhullar family.
“He just realized that it’s not the facility or where the campus was but you have to feel comfortable and be able to trust people and that was a big factor,” said Avneet Bhullar, the older sister. “I think it will be a lot better so we can cheer for one team and be able to see both of them and take fewer trips. The fact that they are playing together and supporting each other is the most important thing.”
Although he was in attendance for three Aggies games during last season, Tanveer Bhullar made an official visit to NMSU last weekend. His only other official visit was earlier this summer to Oklahoma. Tanveer Bhullar played at Father Henry Carr in Toronto last season.
During the regular season, Tanveer Bhullar said he was leaning toward a commitment for 2014, but he obviously had a change of heart.
“I got my diploma and I realized that spending another year in high school won’t mean as much compared to spending a year in college with college coaches and college trainers,” Tanveer Bhullar said.
Sim Bhullar will be among the top players in the Western Athletic Conference his sophomore season. He averaged 10.1 points, 6.7 rebounds and 2.4 blocks per game last season, earning WAC Tournament Most Valuable Player honors after leading the Aggies to their second straight conference championship.
“He was just telling me that I have to know that if I came to NMSU, I wasn’t allowed to slack off, which I took as a positive thing,” Tanveer Bhullar said. “He is there to push me and help me out.”
Jason Groves can be reached at 575-541-5459

Awesome news!!! Can we start to call them the Two Towers?