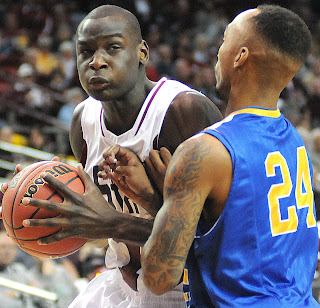 Bandja Sy and Tyrone Watson have been very good role players on some very good Aggies teams. The result has been two WAC championships and the Aggies are certainly in contention for a third, which would be quite an accomplishment to cap a career.

I’ve been a big Watson fan throughout his career because of  his versatility. Watson has started all but one game the past three seasons before he was suspended this year.  He never had to do as much as has been asked this season. In 2010, he only played 10 minutes a game as a freshman in a backup role to Wendell McKines or Troy Gillenwater on that loaded offensive team. This year is the first time he’s cracked double figures in scoring with 10.7 points per game. Watson shoots over 50 percent for his career and averages 5 rpg. Some standout moments from his four years in Cruces included a 26 point explosion this year at Seattle where he also had six rebounds, five assists and seven steals. Last year, Watson beat Bakersfield with two free throws with .9 seconds left for a road win. Watson posted his career high in a home loss to UNM in 2010 with 14 rebounds. Watson’s second of his 95 starts, he scored the first seven points in an 87-80 road win at UTEP as a freshman in 2010 on a tournament team that was 2-5 entering that game prior to the return of Gillenwater and McKines.

Sy’s standout moments to me are any of his three dunks throughout his career that ended up on Sportscenter or the countless that didn’t. Sy has always been an amazing athlete but my early impressions of him were of a raw player who didn’t know the language and didn’t really know basketball. Sy landed at NMSU because Menzies was recruiting Chili Nephawe at Stoneridge Prep in California and Sy was a teammate.
“He came to see Chili and he saw me as well,” Sy said. “I could understand English but my teammates helped me a lot. I wasn’t allowed to speak French  but I did anyway.”
There was a play in Sy’s freshman season where there was an Aggies inbounds pass at one baseline and Sy was a safety option near midcourt. The ball was passed long and just as it was crossing halfcourt, Sy saved the ball from a backcourt violation — only in that situation you can go backcourt. How far he’s come. Sy really improved last year as a defensive stopper and a spark off the bench, as shown by his block of Phillip McDonald and 3-point play at the other end to ice last year’s win at UNM or  his 3-4 shooting night from 3-point range to beat Utah State in Logan last year. An interesting note on Sy, his older brother, Amara Sy, has had a nice career for himself in Europe, currently playing for ASVEL in France and wearing the No. 10 shirt.
“He tells me to have fun and enjoy myself,” Sy said.
Posted by Jason Groves at 10:08 PM

From a pure body-type and athleticism standpoint, I see a lot of North Carolina's Michael Jordan in Bandja Sy. He is more athletic than Paul George who was also very raw coming out of college. Sy has a great attitude and defensive mind-set that will help him at the next level. I really like his game!
Tyrone is a baller who has been been good for us on the court with his defense and leadership. He also can play defense against the best of D-1 talent. He is a guy who can really help out his team by the way he accepts the role his coaches give him. He will be missed!

Fantastic post but I was wondering if you could write a litte more on this topic?
I'd be very grateful if you could elaborate a little bit further. Appreciate it!