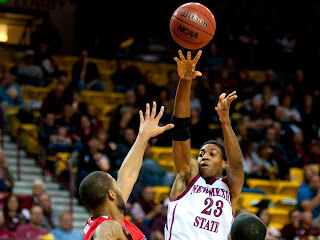 
I normally do a little countdown of the top players in the WAC leading up to the beginning of practice. The last couple years I felt like I had a pretty good idea of who was returning. With the addition of Denver, Seattle, UTSA, UTA and Texas State, I’m not as confident since I haven’t seen these guys in person. Here is who stands out, at least on paper and the internet. By top players, I’m talking about guys who you could potentially see on preseason All-conference lists.

IDAHO
Kyle Barone 6-10 senior
If there is such a thing as a regular reader of this blog knows I like Barone as a player. I think he’s extremely talented but for some reason he doesn’t get the ball nearly enough at Idaho. 12.9 ppg and 8 rpg shoting 55 percent from the field.
Stephen Madison came on as a sophomore as a complimentary player , shooting 38 percent from 3 point range and averaging 12. 1 ppg. Not sure he can do that as a go to player.
Connor Hill was the second best Vandals  3 point shooter last year. He shot 39 percent

Kenneth Smith, explosive speedy point guard who should be better as a sophomore.
4.2 apg. Didnt seem like he was trusted as the season went on but still plaeyed 25 minutes per game in WAC play.

NEW MEXICO STATE
Daniel Mullings This is the first time since Marvin Menzies has been coach that the Aggies don’t have a no brainer preseason all WAC type player. Mullings is probably the closest thing. Mullings averaged 10.4 ppg and 5.6 rpg in WAC play. He was top 2 in steals per game with 1.79. People who watch him on a regular basis know how important he is. It will be interesting to see what kind of numbers he puts up when teams will probably key in on him a little bit more

SAN JOSE STATE
James Kinney, I guess. Kinney led the Spartans in scoring  with 15.8 ppg and shot 40 percent from 3-point range. He’s the best player on a bad team that lost its best two players when Keith Shamburger transferred and Will Carter graduated.

An interesting player on the Seattle roster is Allen Tate, who played with Jeff Taylor at Hobbs High. Seattle has a 6-11 freshman from the UK as well.

TEXAS-ARLINGTON
Texas-Arlington went 15-1 in the Southland last year and it looks like Kevin Butler is their best returning player with 10.8 ppg. At 6-5, he was second on the team with 6 rpg. 6-10 senior forward Jordan Reves averaged 7.8 rpg last year.

TEXAS-SAN ANTONIO
UTSA ranked 13th in the NCAA in 3-point percentage at 39 percent. The best shooter, Melvin Johnson, transferred to Arkansas State. They still have Jeromie Hill (12.3 ppg, 40.5 percent 3-point) and Kannon Burrage, who led the team with 13.6 ppg and shot 39 percent from 3-pt range.

Utah State also has a couple of other players to keep an eye on.
Jarred Shaw is a 6-10 transfer from Oklahoma State. He was a top 120 player according to Rivals.com. Kyisean Reed was an all-newcomer player last year year at the power forward position, finishing with 10 ppg and 5 rpg.
Posted by Jason Groves at 4:01 PM